About City of Erzincan

Erzincan (pronounced [eɾzinˈdʒan]) is a city in northeastern Turkey.  Located at an altitude of 1,185 meters above sea level, the city’s climate produces snowy winters and warm summers.

The city is notable for handcrafted copper goods and a special cheese called “tulum peyniri” in Turkish. It is a significant road and rail junction and was once noted for its silverware. Current industries include sugar refining and textile industries.

The city is home to the headquarters of the Turkish Third Army.

Erzincan has a continental climate (Köppen climate classification Dsa) with snowy winters and hot and dry summers. Spring is the wettest season whilst late summer is the driest.

Erzincan is a pleasant city to live in. The city is home to 200,000 people. Although it is not among Turkey’s largest cities, it has everything one finds in other cities: museums and galleries, theatres, a university, institutes and libraries.

It offers a wide variety of cafes, pubs, bars and restaurants. Relief from the hustle and bustle of life in the city can be found in the numerous parks and woodland areas, which in some places reach nearly into the city centre.

How To Get There

AIR:  Airport by taxi and minibus taxis provide transportation for the passengers between the city center and airport. The airport is 7 km away from the city center. Airport taxies take passengers to the centre of town (nearly cost 20 Turkish Liras).

-Arrival first to Erzurum as a nearby city by plane/bus/train, and then 2.5 hours by bus to Erzincan 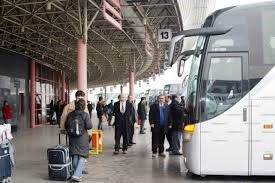 BUS:  It is possible to reach to Erzincan by bus from the capital city of Ankara which takes about 10 hours. There are quite good bus companies.

RAIL: The train station can be reached by minibus and bus line. There are daily trains between Erzincan Divrigi. Also Orient Express operates every day.